Unfamiliar with the terms and phrases found on trail? Use the glossary below to build your hiker knowledge and impress your family and friends!

Alpine Zone: ‘Above treeline’; Occurs at high-elevation where trees are unable to grow.

Bald: Treeless area surrounded by forest on a mountain summit or slope.

Base Weight: Total pack weight without consumables (food & water) or the clothes the hiker is wearing.

Bear Bag: A bag, containing food, trash, and toiletries, that is traditionally hung in a tree to prevent attracting bears (or raccoons, skunks, mice, etc).

Blazing, Aqua: When a hiker goes by waterway (canoeing, kayaking, etc) instead of hiking. Popular alternative to the Shenandoah National Park on the AT.

Blazing, Blue: When a hiker takes a side trail (normally blazed in blue) rather than the main trail.

Blazing, Yellow: When a hiker hitchhikes around a portion of the trail, following the “yellow blazes”.

Bounce Box: A box of supplies a hiker ships–or bounces–forward to the next resupply point.

Bubble: A dense cluster of hikers who all hike around the same pace. Most common phrasing: “I’m going to hike on to avoid the bubble.”

Cairn: A man-made pile of stones built to mark the official trail. Most commonly found in areas with little tree cover. Uncontrolled building of these piles can disrupt fragile ecosystems and confuse hikers. Don’t be a Karen: Don’t build cairns.

Cowboy Camping: To sleep under the stars, as opposed to in a shelter.

Day Hiker: A hiker who is only out for the day and will return to their home or hotel room in the evening.

False Summit: HUGELY disappointing. Occurs when a hiker believes they have reached the summit of a mountain, only to realize they had reached a small plateau.

FKT: Fastest Known Time. A speed record held for completing a major trail as quickly as possible either ‘supported’ or ‘unsupported’.

Flip Flop: To hike a large portion of a trail before “flipping up” to another spot on the trail to hike back to where they left. Commonly occurs in an attempt to avoid difficult hiking conditions due to weather.

Gap: Low point on a ridge between two mountains.

HYOH: Hike Your Own Hike. Common phrase used to express that each must hike in a manner best for them and shouldn’t compare themselves to other hikers.

Hiker Hunger: You know it when you feel it. Causes unprecedented pizza consumption.

Hiker Trash: Name thru hikers proudly adopt after they have spent sufficient time on trail to no longer care for basic social courtesies, such as concerns for body odor or napping in public areas.

Hostel: A bunk house where hikers can rest for the night. Typically has a shower and/or laundry.

LNT: Leave No Trace (www.lnt.org). The seven principles of outdoor ethics all hikers should abide by.

Nero: A day when a hiker goes nearly zero mileage.

Postholing: When a hiker steps into snow, and effectively buries their leg.

Purist: A hiker who hikes every inch of the designated trail and does not deviate.

Section Hiker: Someone who hikes a trail a section at a time.

Slack Packing: When a hiker carries only the essentials for a day of hiking. They or the rest of their gear are shuttled up trail and the hiker then ‘slack packs’ to rejoin their full packs.

Stealth Camping: To camp in an undesignated campsite in the backcountry.

Switch Back: A zigzag trail that leads up a steep hill. Used to ease the trail’s ascent or descent, and reduce the amount of erosion.

The Trail Provides: Saying when something good (or bad) occurs while on trail.

Thru Hike: To hike the entirety of a long-distance trail in one go.

Trail Angel: Someone who helps hikers in a variety of ways: rides, food, trail magic, etc.

Trail Legs: The point when a hiker’s legs have strengthened to become accustomed to big mileage.

Trail Magic: An act of kindness or useful object found on trail: cooler full of cold drinks, a hot meal, a ride into town.

Trail Name: A pseudonym given to hikers by their peers, which becomes their identity on trail.

Triple Crown: Achieved after hiking the three major long-distance trails in the US: the Appalachian Trail, the Pacific Crest Trail, and the Continental Divide Trail.

Yoyo: To thru hike a whole trail, and then to turn around and hike back to the beginning.

Zero Day: A day when a hiker goes no miles, a rest day.

Welcome to the Fried Green Experience!

The Triple Crown of backpacking consists of nearly 8,000 miles of trail, and I intend to thru hike them all! Photos, stories, and resources from my outdoor adventures can be found on this site. I hope, in sharing my hiking experiences, I help to inspire others to step outside their comfort zones and climb their own mountains. 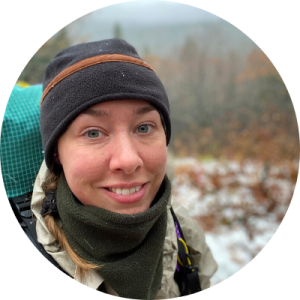 Hey, I’m Fried Green Tomato! I never backpacked before I thru hiked the Appalachian Trail. Now, with a few thousand miles on my shoes, I’m ready for the next adventure!